Start a Wiki
Ai "Uu-tan" Hibiki (響 逢衣 Hibiki Ai) is an upbeat girl traveling with Nozomi. She has a one-track mind and a big heart, and is quick to become comfortable in a situation. She wants to become strong.

She has black and sea-weed green hair styled in twin tails and green eyes. Her fringe is parted to the right, fitting with her stylish hairstyle. An icon feature of her appearance looks like to be her butterfly hair accessory which styles her hair.

In episode 1, she is seen wearing a dark grey and white jacket that resembles the group she is in.

She wears a pale, purple jacket with fleece lining that has a turtle neck along with a red collar across. It appears she only buttons the top and leaves the left unfastened, revealing her chest. Her bra is white with a green plant on it. She wears blue denim shorts and ripped purple tights resulting in a off-beat and edgy outfit. This outfit is completed with black ankle boots.

She is a little impulsive and appears to be not to be completely aware of her surroundings/situations. She's also curious and does to not feel much hostility towards rivalry clan, the Saitama Clan.

Her personality is carefree and outgoing. This is evidenced by when she was kicked out of her clan and was quick to ask for a free ride from her ex-rivalry clan member Nozomi.

In her childhood, she was referred to as 'Uu-tan'.

In Episode 1, she is seen to be part of the Always Comina Squad led by Kuniko Shigyou at first. She was among the squad watching a fight broke out between Kuniko and Masami from Hiyoshi Town Propellers who fight as Maccha Green. Ai also witnessed the Hiyoshi members send off to a roller coaster ride which turns out to be a trap by Kuniko and Yukari and the crew of Higashi Murayama clan. 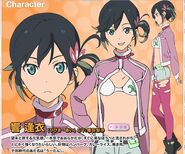 Add a photo to this gallery

Retrieved from "https://therollinggirls.fandom.com/wiki/Ai_Hibiki?oldid=7225"
Community content is available under CC-BY-SA unless otherwise noted.