Chiaya Misono (御園 千綾 Misono Chiaya) is a fanged girl travelling with Nozomi and the others. For some reason she knows Nozomi, Yukina, and Ai's childhood nicknames.

Chiaya has wavy, blonde hair which is half styled into braids. She has one long eyelash at each end of her pastel pink eyes giving a very cutesy appearance. One unique feature of her is that she has a fang tooth. Her character item is her large ice blue hair flower accessories placed on each side of her head.

She wears a large green coat with a fur-trimming hoodie over a grey jacket which in turn is worn over a white polo shirt. She also wears black leggins with pink four-petal flower-looking symbols on the sides and pink boots with white flaps.

She has been known to turn into what can be described as a squid. It has not happened very often though.

She is rather obedient, innocent, and also very friendly.

In Episode 1, she bought Takoyakis from Hinayo Moritomo at the Morimoto's Restaurant. Nozomi wondered who the masked girl is after she passed by her and take the Tayakis home with her on her motorcycle. She was last seen hiding behind the Hiyoshi Town Propellers headquarters' wall peeping Masami going to save the Hiyoshi Town Propellers member trapped by the Higashi Murayama clan at the local amusement park.

Her mother is Misono Haruka, her adopted mother and the president of Tokorozawa. 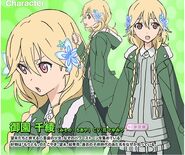 Headshot of a chibi version of her. 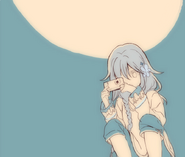 Chiaya (Squid Form)
Add a photo to this gallery

Retrieved from "https://therollinggirls.fandom.com/wiki/Chiaya_Misono?oldid=6918"
Community content is available under CC-BY-SA unless otherwise noted.